This is the most beautiful house plant.  Its flowers have nearly all the colours of the rainbow  – rose pink, yellow, blue, green.   It blooms around this time every year for me – despite being neglected, which is just what it seems to need – neglect.

Its pendulous pink, green and blue flowers with striking yellow stamens dangle at the end of long arching bracts.

I have had it for a few years now (parish fetes are great places to buy unusual plants) but I have only just discovered its name.  I have grown it in a pot, but I am going to try and grow a few shoots on a piece of bark

It is called  Queen’s Tears because drops of nectar are supposed to “weep” from the flowers when the plant is moved or touched – I haven’t managed to see that yet.

But it is also called Friendship Plant – because it readily sets new offset plantlets which can be given away to friends.  They say the best way to keep a plant is to give it away – if it dies on you,  your friend will have it to give it back to you.

Queens Tears is a bromeliad, (bro-me-lee-ad) originating from South America where they grow as epiphytes, that is they perch in trees in the jungle and absorb moisture and nutrition through their leaves – almost like an air plant as they have very short roots.

It only took a couple of hours to till a paddock in preparation for planting an asparagus bed.

Cabbage, Broccoli and Brussels sprouts (from Glanbia in Bunclody) – covered with a net to keep the blackbirds out – but the slugs are at them already – I just need some organic slug pellets to keep them away

They have survived -5C and will burst back into growth in the coming weeks – with a little help from their constant companion – the sun.

Current raised beds, the timbers of which are rotten

We inherited a number of fibreglass shower units left lying in a field and rather than break them up and throw them out (no one one wanted them for free off Done Deal!) I have decided to used them as raised beds.  Or maybe it is lowered beds in this case!

Because they are almost 30 inches (75 cm) deep, I am going  to insert them into the ground and use the 12 inches (30 cm) of top soil which I am digging out to fill the bottom half of the units.  This will mean that only 18 inches of the bed will be above ground although the actual beds will be 30 inches deep.  The top half will be filled with soil from the existing raised beds, the timbers of which are all rotten.

The units are 24 inches (60 cm) wide and 6 feet (1.5 m) long with one open end.  I am going to put two together so that there will be a drainage section in the middle where they meet. Also, I have drilled holes in the base and sides for extra drainage

I hope to have 5 raised beds – very hard work digging out all that soil and refilling the beds (I reckon it will take me 2 days for each) but I see it as a once off effort.  The fibreglass should last forever and I will never have to dig again! 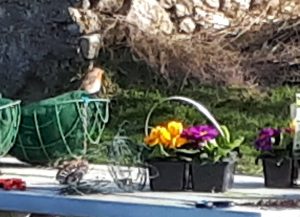 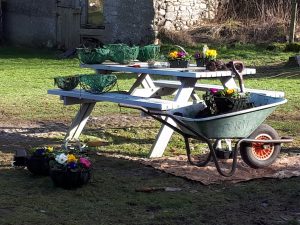 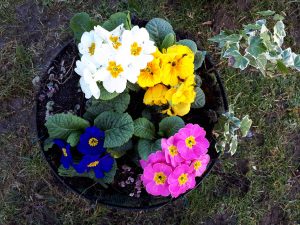 The finished product.  Dead head the flowers to keep blooms coming until well into the summer

I took the opportunity of a lovely sunny spring morning to pot up some primroses in hanging baskets to brighten up the place.  Little pots of 4 are reasonably cheap in Aldi at the moment and just a couple of sprigs of variegated ivy robbed off trees in the woods (they will root themselves and you will always have them) is an economical way to add interest.

Of course the ubiquitous robin helped me!

No doubt there are loads of daffodils in bloom all over the country already – even my neighbour has them in bloom.   But I can find only one here in the woods which has been brave enough to bloom despite the alternating very dreary wet or very frosty nights. 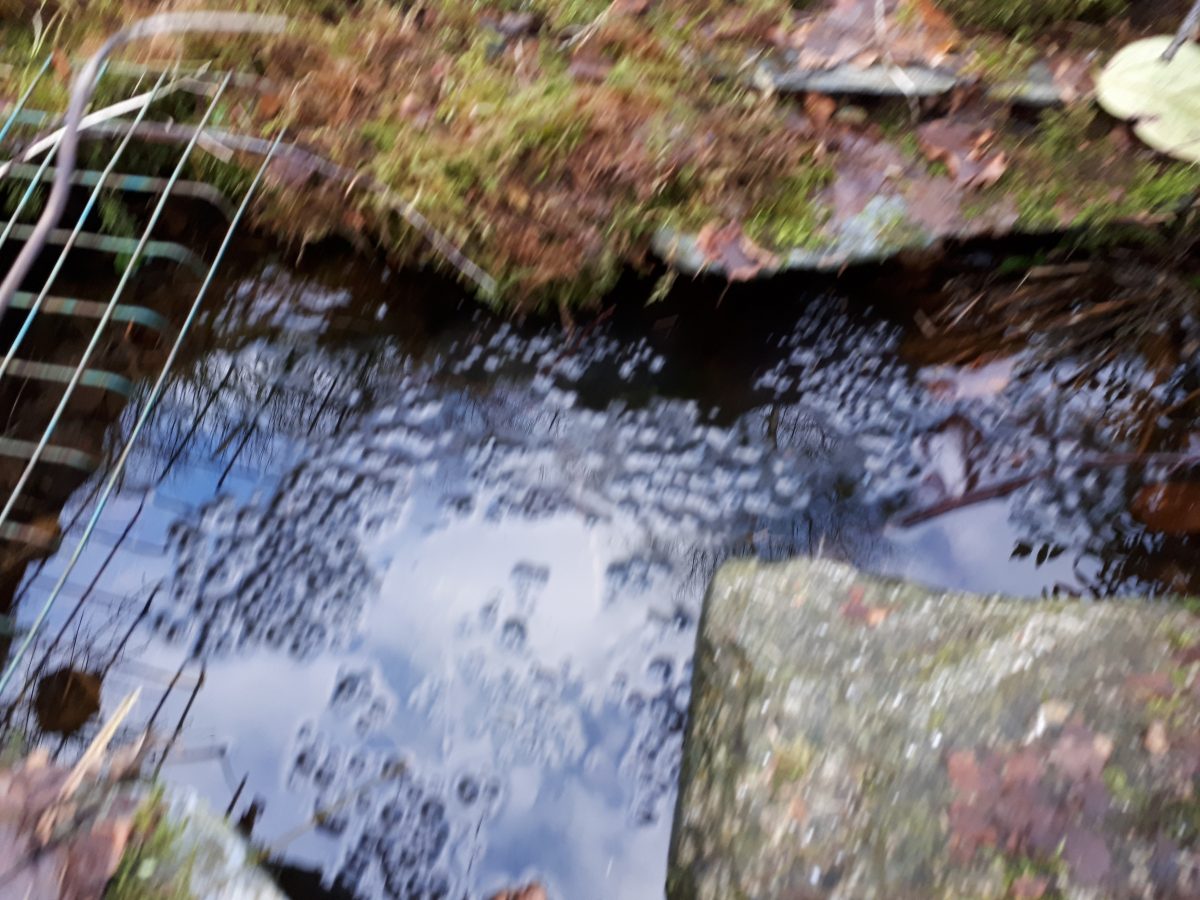 I was away for a couple of days so the dogs were not down in the woods. But  I came back to the sound of croaking frogs and fresh spawn in a small pond in the woods.  I’ve covered it with a grid to keep the dogs out and will look forward to tadpoles and baby frogs later on in the spring. 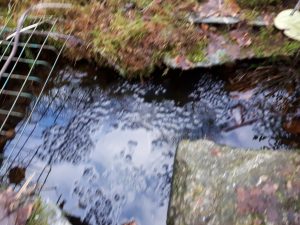 Sarcococca confusa – Fragrant Sweet Box  – is a lovely small shrub with creamy flowers in December and January.  But while the flowers are tiny, they make up for it with a beautiful scent – lovely in a pot just outside your door in the depths of winter.

After a wet and miserable December, the gallant snowdrop has appeared to raise our spirits for 2018.  It is not called ‘galanthus‘ for nothing!  There are 100’s of varieties, with just a green spot making the difference between them.  But the common snowdrop – Galanthus Nivalis – is as good as any and a couple of bulbs planted in autumn will increase year on year (if the mice of squirrels don’t eat them!) 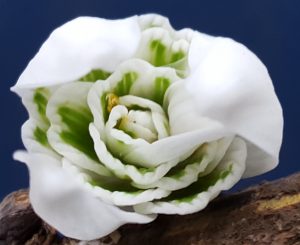 But my favourite is not a snowdrop at all.  Is is commonly called snowflake and is a lot taller than the biggest snowdrop.